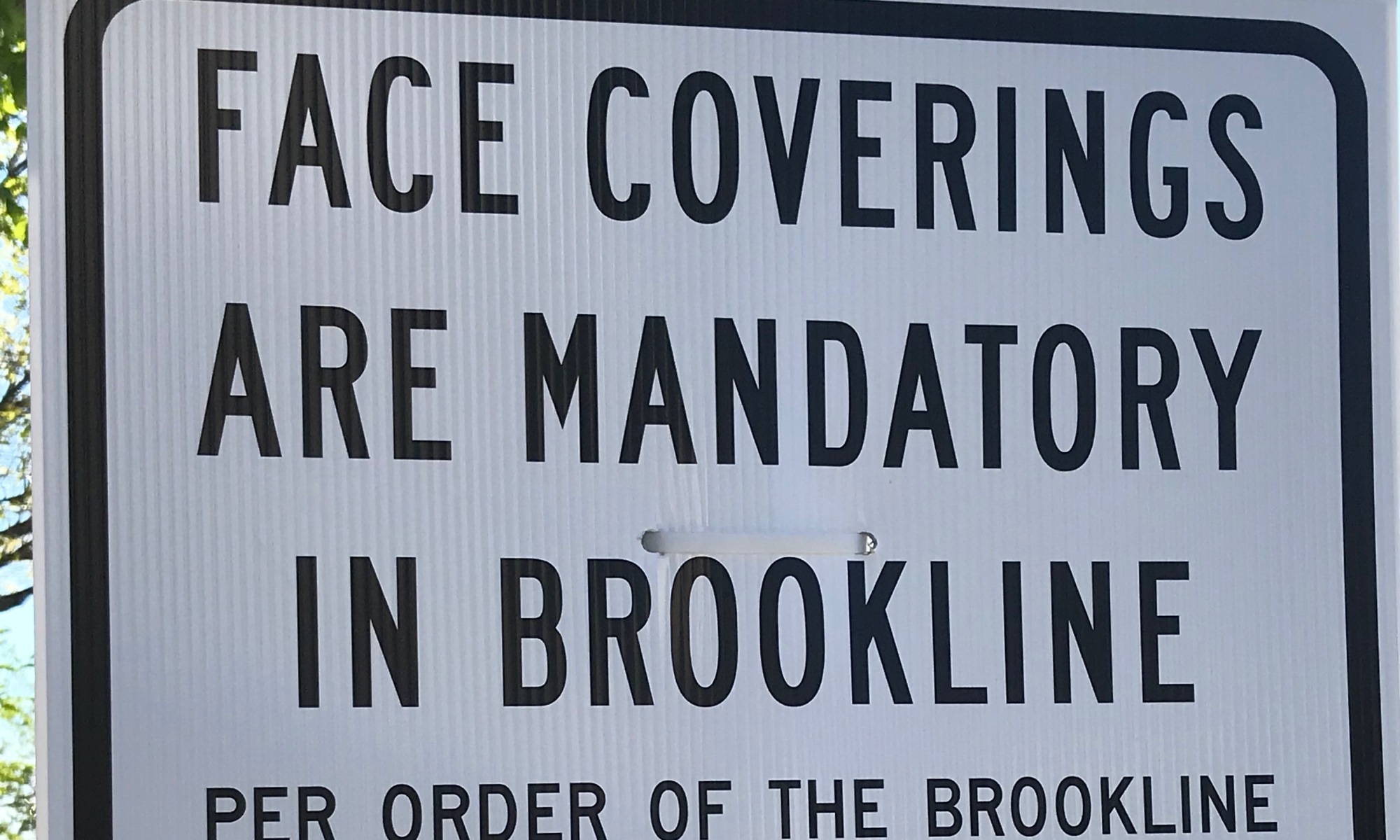 On April 14, 2020, the Brookline Department of Public Health issued the following advisory: “Effective April 17, 2020 every individual is required to wear a protective face covering at all times when in the public.”[1]  The mandate contains no expiry.  This article poses constitutional questions relevant to the town’s broad rule.

The Fourteenth Amendment to the U.S. Constitution contains substantive liberty rights that are not explicitly provided for in the Constitution.  Abortion, for instance, is one of these rights.  The following paragraph is an excerpt from the landmark case, Planned Parenthood of Southeastern Pa. v. Casey, 505 U.S. 833, 846-847 (1992).

“Constitutional protection of the woman’s decision to terminate her pregnancy derives from the Due Process Clause of the Fourteenth Amendment.  It declares that no State shall ‘deprive any person of life, liberty, or property, without due process of law.’  The controlling word in the cases before us is ‘liberty.’  Although a literal reading of the Clause might suggest that it governs only the procedures by which a State may deprive persons of liberty, for at least 105 years . . . the Clause has been understood to contain a substantive component as well, one ‘barring certain government actions regardless of the fairness of the procedures used to implement them.’ . . .  As Justice Brandeis (joined by Justice Holmes) observed, ‘[d]espite arguments to the contrary which had seemed to me persuasive, it is settled that the due process clause of the Fourteenth Amendment applies to matters of substantive law as well as to matters of procedure.  Thus all fundamental rights comprised within the term liberty are protected by the Federal Constitution from invasion by the States.’ . . .  ‘[T]he guaranties of due process, though having their roots in Magna Carta’s “per legem terrae” and considered as procedural safeguards “against executive usurpation and tyranny,” have in this country “become bulwarks also against arbitrary legislation.”’”[2]

In order for a court to recognize a substantive liberty right, that right must be “carefully described” and “deeply rooted in this Nation’s history and tradition.”[3]  This analysis is extremely fact laden and will not be conducted here.  For the purposes of this article, we will assume that history demonstrates that the people have a general right to refuse a government’s order to wear a mask and, thus, is a substantive due process right.  Such right might also be found within the free speech clause of the First Amendment to the extent that the wearing or not wearing of a mask conveys a message, such as deference, fear, or even politics – but that is the subject of future post.

The Fifth Circuit Court of Appeals recently recognized in In re Abbott, No. 20-50296, U.S. Court of Appeals (5th Cir. April 20, 2020), that during the coronavirus pandemic, individual rights secured by the U.S. Constitution, abortion specifically, could be reasonably restricted.  The following paragraph is an excerpt from that court opinion.

“[W]hen faced with a society-threatening epidemic, a state may implement emergency measures that curtail constitutional rights so long as the measures have at least some real or substantial relation to the public health crisis and are not beyond all question, a plain, palpable invasion of rights secured by the fundamental law. . . .  Courts may ask whether the state’s emergency measures lack basic exceptions for extreme cases, and whether the measures are pretextual-that is, arbitrary or oppressive.”[4]

In arriving at this conclusion, the Fifth Circuit Court of Appeals cited a Supreme Court case from 1905, Jacobson v. Massachusetts, 197 U.S. 11, 31, 38 (1905).  The Supreme Court in Jacobson held that a Massachusetts statute applied by the city of Cambridge through regulation to require smallpox vaccination of its inhabitants was constitutional.[5]  The following is an excerpt from Jacobson.

“Smallpox being prevalent and increasing at Cambridge, the court would usurp the functions of another branch of government if it adjudged, as matter of law, that the mode adopted under the sanction of the state, to protect the people at large was arbitrary, and not justified by the necessities of the case.  We say necessities of the case, because it might be that an acknowledged power of a local community to protect itself against an epidemic threatening the safety of all might be exercised in particular circumstances and in reference to particular persons in such an arbitrary, unreasonable manner, or might go so far beyond what was reasonably required for the safety of the public, as to authorize or compel the courts to interfere for the protection of such persons.”[6]

Under Jacobson, where a government acts arbitrarily or unreasonably, courts are “authoriz[ed] or compel[led] . . . to interfere for the protection of such persons [aggrieved].”[7]  Brookline’s health advisory is potentially arbitrary in two respects: (i) the lack of expiry; and (ii) the requirement that a person wear a mask “at all times when in the public,” irrespective of the risk of COVID-19 spread.  First, without an expiration date, the health advisory is not related to COVID-19 unless the Town of Brookline is taking the position that the novel coronavirus is with us forever.  Second, the requirement that a person wear a face mask in the middle of an empty park or side street does not, under current CDC advisory,[8] bear any relation to the spread of COVID-19.  The Select Board has issued guidance that a face mask need not be worn when one is 20 to 25 feet away from another person,[9] but it is unclear what legal effect such guidance has on the advisory, especially where it flatly contradicts the plain language thereof.

Brookline “town police . . . confirmed . . . that they are not enforcing the order.”[10]  If the advisory is not being enforced, is its purpose to mitigate the spread of COVID-19 or to promote Brookline’s image of social consciousness?  If it is the latter, the advisory is pretextual, inviting a civil rights lawsuit.

[1] A posting on the town’s website is phrased differently: “Everyone aged 2 and over is required to wear a face covering in public.”  See https://brooklinecovid19.com/face-coverings/

This website is designed for general information only.  The information presented here should neither be construed as legal advice nor the formation of a lawyer/client relationship.  If you seek legal advice or representation, you must first enter a formal agreement.